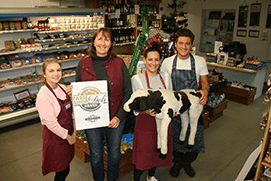 From over 500 entries nationwide, local retailer Foxholes Farm Shop is commended for “Farm Shop of the Year” category in the Farm Shop & Deli Awards 2015.

Catherine Smith, Managing Partner at Foxholes said, “This commendation has exceeded our expectations, our whole team are really pleased to have been recognised from amongst strong competition across the whole of the UK. We would like to thank our customers, staff and the judges for all the support and encouraging comments. Now we are crossing our fingers for a possible win at the regional awards in March. Please do follow us on Twitter @foxholesfarm for the latest updates. “

Now in its second year, the Farm Shop & Deli Awards, in partnership with Olives Et Al, recognises the very best standards in the speciality retail market and celebrates the highest levels of service, product knowledge, initiative, innovation and community involvement. The Awards praise the unsung heroes of the high street and speciality retail scene with categories ranging from butchers, bakers, farm shops and delis through to garden centres, food halls and online businesses.

The awards were judged by a team of expert judges from the world of speciality retail, fine food and food media. Once the award entries had been received the judges drew up a shortlist of entrants and then carried out a series of ‘secret’ visits in December 2014 to see the entrants in action.

Judge Nigel Barden, Chairman of Judges and Food and Drink Journalist/Broadcaster, says: “Another brilliantly rewarding set of visits. There are some very focused, driven and talented food retailers in Britain, who deserve to be nourished and encouraged. It’s marvellous that these awards can bring them to much wider attention.”

Elaine Lemm, the Co-Chair of Judges and Food Writer, says: “I thought the high standard of last year’s entries for the awards were unsurpassable. I was wrong. The quality, dedication and sheer hard work of all the businesses entering this year showed this is, once again, a sector of which to be proud. It is no wonder that shopping habits in the UK are changing with this retail of this quality on offer for the British shopper.”

Nikki Storrar, Overall Winner of the Awards in 2014 from Ardross Farm Shop, says: “Winning last year was beyond our dreams. It was actually a member of staff who gave us the idea as it was something we had never really considered. The year after winning the awards was fantastic. The staff got so much pride in what they were doing. So to be asked to be a judge this year was great but also pretty daunting because of the effect that you may have on the person who has entered. It’s also been a fantastic experience because I learnt a lot about what’s happening in the industry and I also could sympathize quite a lot with people who have entered.”
The Farm Shop & Deli Awards 2015 received a record number of entrants from over 500 businesses across the UK, along with thousands of public votes from consumers supporting their favourite speciality retailers.

Foxholes Farm Shop was one of twelve category winners and twenty three commended chosen following a day of intensive judging by leading speciality retailers and key industry figures along with mystery visits conducted throughout December by Nigel Barden and Elaine Lemm.

The scores will now be counted and judged within the nine UK regions, announcing the Regional Champions in March – these winners will go through to the final with the chance to win Retailer of the Year. The overall winner will be announced at the Farm Shop & Deli Show on Monday 20 April 2015 at 2:45pm at Birmingham’s NEC.

Closer to home, Foxholes Farm Shop has also been nominated for 3 categories in the Herts Food & Beds Awards and members of the Public can vote by visiting http://hertsfoodanddrinkawards.co.uk/. The categories are: Independent Food Retailer, Outstanding Service Excellence and Best Farmers Market Stallholder.