Foxholes Farm Shop has been shortlisted as a finalist in the 2016 FARMA awards.

The FARMA awards are designed to represent the best true farm retail businesses. The judging process to get to this stage was not easy; having submitted a video of the business and application, a panel of leading retailers met to discuss the applications. During this stage, those applications showing real drive, passion and demonstrating real skill in running a business and championing real farm produce direct from the farm were then shortlisted.

Michael Mack, Managing agent for FARMA, said Foxholes Farm Shop submitted a great application this year and it’s a real credit that they have been shortlisted. This year the judges will be looking for businesses which have passionate leaders, fantastic staff and real understanding about the importance in the connection between the business and the farm.” 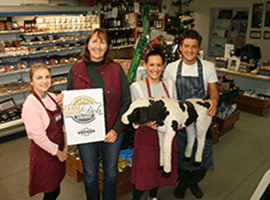 Over the coming months Foxholes Farm will have visits from the judges and secret shoppers to explore the business in detail and on 29th February will be on tenterhooks to see if we have been awarded the best Small Farm Shop award.

If we do win the category we will then be put forward to the grand finale with the chance to win the National Farm Retail Champion of 2016 award.

The FARMA awards have been assessing the farm shops, farmers’ markets and PYO for over 10 years. Each year we look to find those businesses which not only demonstrate a real business acumen but also champion quality produce which they have produced themselves.

FARMA: FARMA is a co-operative of around 400 businesses from across the UK that share one thing – a passion to promote food which is grown and sold by the same hands. Each member has a share in the co-operative; this ensures that the members all sign up to a clear mission that we all believe in.

THE JUDGES: The judging panel comprises of: