On 22nd March 2017 the 2016 Countryside Alliance Awards, nicknamed the Rural Oscars, were handed out by the Environment Secretary Andrea Leadsom MP at a Parliamentary reception. Businesses from across England and Wales including Foxholes Farm, who had already won the regional title, came to Westminster to find out if they had taken the national title. Foxholes Farm won overall second and ‘Highly Commended” for best Local Food category.

Shortly after the prizes were handed out Westminster went into lockdown following a terrorist incident. While the attending rural business men and women, and Countryside Alliance staff, were all safe, our thoughts are very much with those affected by the incident. Catherine said” We were locked in the grand hall with all the people staff and visitors. They were not letting anyone leave, there were probably about 600 people there. No one told us what had happened. I’d had lots of texts but we could not see what’s going on outside. I felt for the elderly farmers’ who were with us and the young farmers’ who had come down with their young children, some of them had young babies in their arms.” The professionalism and care shown by Parliamentary staff and security services was much appreciated and we all offer our thanks to them for their commitment. 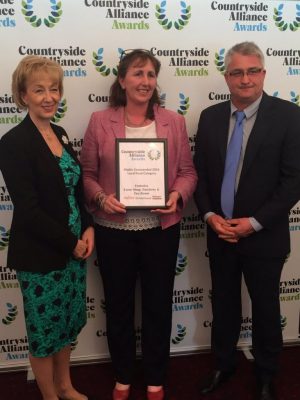